I’ve been tussling with a review of Monsterhearts 2 that has been sitting in my drafts folder for months. It’s not because I don’t like the game – I love it, I’ve loved playing it in a campaign and analysing my reactions to it. I’ve enjoyed the resistance to change that has broken in play to reveal secret genius and the resistance that’s grown more stubborn and pushed me to hack moves for myself. But I have too many thoughts and too many feelings about it, far more than would be interesting or engaging to read unless you want a paragraph on every core mechanic and move in the game. (Looks at the length of this post. Gives a hollow laugh.)

So, while I wrestle with my love of one Avery Alder game, I’m going to write a review of another. Or rather, it’s a review of four games: the newly-collected Variations On Your Body: Four Pervasive Games. I guess this is less of a review and more a self-reflective piece on my reaction to it. That seems appropriate for such an intensely personal, intimate work. 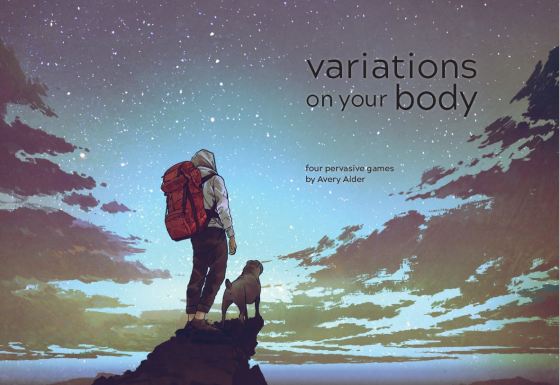 I hadn’t heard of the concept of pervasive games before, but I’m already in love with it. I adore the social aspect of gaming, the trust that builds between groups, the shared story space and the friendships we make along the way. It was paradigm-shifting for me to read in Monsterhearts 2 that trying to control the story made it small enough for one person’s mind – and while I truly believe that my imagination has infinite capacity for creativity, it’s an entirely different feeling when you collaborate on something.

At the same time, I have also been seeking more personal experiences, two-player and solo games. I’m nervous around other humans. It’s an anxiety thing. I’m anxious about expecting them to care about my story and about me. I’m worried about taking up too much of the spotlight, being selfish or greedy. I think more critically about my stories when I have an audience. I don’t feel I can open up to the intimacy or trust to tell a reactive story, even with people I’d trust with my life – I don’t trust anyone else with my stories. I also worry because I know I get obsessive, especially when real life is stressful.

Pervasive games are, to quote Alder, ‘meant to be played in the margins of your life’. Variations On Your Body contains four solo pervasive games that absolutely stunned me when I read them and an essay on gaming as a space for exploring possibility. These games feel beautifully transgressive purely because they compel you to experience alone – gaming is weirder when you’re alone, it’s sadder and lonelier, or so my reactions tell me. OK, there is guidance on bringing others in, but each game is framed as a self-reflective experience. It should not be underestimated how much these games embody parts of Alder’s own struggles over the years: queerness, mental health issues, cultural erasure and trans issues are all an important part of this collection. While I can’t speak to so many of those, Alder’s commentary is immensely valuable in showing how games can help us reframe our experiences on our terms. Rewrite our own stories to make ourselves the heroes rather than the victims.

Teen Witch – This is, essentially, the experience of being a teenager who tries out spells. I know I went through that phase, most gamers did, I suspect. There were teen magazines with spells involving candles and ribbons and photographs of your beloved, and the kinds of books you could only really find in headshops about unleashing your inner goddess. When we grow up, this becomes something we admit shyly to one another. The adults I know who’ve continued their magical practices have transmuted and refined these into very personal approaches. It’s weird how I’ll happily act out a ritual in a game to exorcise a monster or empower another player, but the idea of performing a ritual that is actually meant to be magic as part of a game is very strange indeed. Still, there’s something incredibly compelling about the glossy trappings of teen magic that Alder taps into perfectly, and the way that Teen Witch is about exploring your own practice until you make your ritual. Is it a game? I have no idea. Is it roleplay? Yes, for sure. Is it magic? Undoubtedly.

Brave Sparrow – Brave Sparrow is a beautiful little game (or perhaps a Very Big Game) about everyday bravery and witnessing beauty and acts of subversive courage. It’s a game I suspect I will never play because I don’t find feathers very often and I am not a brave enough sparrow to break into places and spraypaint things. It is lovely, though – celebrating each person’s (sparrow’s) unique capacity to appreciate, imagine and endure.  The final section of Brave Sparrow is about realising that you might not be a secret, brave sparrow after all, but it’s also about striving to figure out what else you are. I think I would carry words, or shiny things, instead of feathers. I collect them anyway (because sorry, maybe I’m not a sparrow but a magpie). The final section of Brave Sparrow gives me permission to do that, though, and more importantly, believes I can.

Universal Translator – I absolutely believe that it was a conscious design decision to write Universal Translator in a complicated way that makes it hard to understand. I came away from reading it thinking that I didn’t entirely get it and that I would need to read it again…and then the penny dropped and I realised that the act of reading it was playing the game. That’s a delightful mind screw, so thank you, Avery Alder. It’s…a game about journalling? About trying to perceive others differently? About communication and the things we miss? About fictionalising our interactions or maybe just writing a subjective, fragmentary account of daily life? I don’t know. We all find it quite stressful to not fully understand something, and I feel that particularly with games because I’ve struggled with mechanical explanations over the years. I mostly live a privileged life where I understand pretty much everything I hear or read. But honestly, you should just read Universal Translator, if something that is designed to be inaccessible will be an acceptably stressful experience for you. That’s the best way to play.

Good Bones – I love Good Bones. It’s an act of making your own body strange to you but also very familiar – recasting how you see it. It reminds me of the Calaca fan skin from Monsterhearts, a cheery and persistent skeleton residing in a transient vessel of skin. It’s also a more playful take on the meme where you are spooked to realise there’s a skeleton inside you, or its ancestor, Ray Brabury’s ‘Skeleton’, which imagines a conflict between your bones and your self. Good Bones is a re-imagining of the same theme that places another self inside you, a non-judgemental, ancient, simple consciousness that supports and cares for you. Good Bones is described as ‘a game for one player with depression’. It steps you through centring and reorienting your mind in your body, learning to ask for help and trusting your bones to keep you going until you can do it yourself, practicing gratitude and activity. Your bones become an ancient guardian of your self, and your self becomes a loving caretaker of your bones. It’s a powerful reframing of recovery from mental illness as a transformation.

The essay at the end, We’ve Been Stranger Things, is a manifesto of possibility. It acts as permission – if Avery Alder, my possibility model and one of the best mechanical designers in the business, thinks that my messy self-delusions are worthwhile (as long as they are healing rather than harming), who am I to argue? I would very much urge readers to consider We’ve Been Stranger Things as deeply as the games in this collection. I’ve defined myself as agnostic for years, but really what I meant was that I believed literally anything could be possible and that I had narratives I told myself (about heaven, reincarnation, soulmates, mystical purpose and guidance) that made it easier to get through the day. Despite people trying to tell me otherwise, I didn’t see any good reason why those narratives shouldn’t be as real as anything else. I didn’t have a philosophy or a denomination for that, because it turns out it was in the gaming community all along.

I don’t have any criticisms. This is such a personal collection that it is impossible to critique in any reasonable fashion. If you’re someone who moslty likes complex rulesets and probability curves and encounter design (no judgement, I also like mechanical complexity a lot of the time), you probably won’t get on with Variations On Your Body. But then, maybe you’ll find that as you read it, something shifts and now you’re in here with the rest of us.

Some thoughts that did strike me about the concept of pervasive games (I have no doubt we will see more in the future – hell, I’m thinking about so many possibilities right now): most roleplaying games are designed to have a magic circle to step into and out of. Bleed is a common concept and one that shouldn’t be taken lightly: I know I’ve struggled with it particularly due to mental health issues. Nordic LARPS and immersive games often emphasise a debrief at the end of the game, a return to reality. A boundary beyond which the game does not cross except in memory. Pervasive games subvert that entirely: they should creep round your everyday life. They should have an impact on your conception of yourself. As a result, it’s more important than ever to take responsibility both for yourself and others. The games in Variations On Your Body are sweet and kind and beautiful, but there is a risk that pervasive games with less thought behind them could be harmful. Even the most immersive games should have a breaker, a safety measure like an X Card or an out of character hand signal. A desperate shout for help that is heard and honoured. But reality doesn’t stop like that, and fractured minds often don’t respect safe words. Variations On Your Body is an incredible call to action, a way of weaving roleplay and games through our lives for positive change. Maybe by embracing the fact that we don’t want to stop pretending, we can harness the compelling power of bleed and immersion. It’s up to us to take these ideas and build on them responsibly.

‘That something is a fiction doesn’t make it any less real’, Alder says in Teen Witch. Monsterhearts helped me tap into a messy, painful side of myself that I kept carefully controlled because I was afraid it would make others reject me. I was only really living half of myself, and only some of that was because I defined as straight at the time. As I slowly started to explore my emotions in a safe space with friends I trusted, I started to grow beyond my boundaries. In her clear-sighted, compassionate and vulnerable way, Avery Alder has created another means for us to broaden our sense of what is possible and in doing so, has yet again reshaped our definition of game.

I can’t wait to explore the possibilities.

Get Variations On Your Body by Avery Alder in pdf here: https://gumroad.com/l/variations-pdf

One thought on “Review: ‘Variations On Your Body’”

Find me on Twitter @Magpie_Elle and my RPGs and interactive fiction on itch.io.